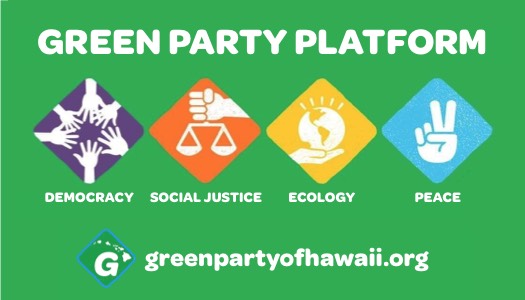 The Green Party of Hawai'i is a grassroots organization of citizens who joined together in 1991. We aim to create a better future for the islands and the world, and a society that is democratic, just, and at peace with itself and the environment. As a local and autonomous organization, our platform is based on the Ten Key Values of the Green Party of the United States, and incorporates the following core values:

As part of a worldwide political movement, each Green group decides for itself how these values are translated into specific recommendations for action. The Green Party of Hawai'i has adopted this platform and, while it draws on programs and platforms common to other groups, it reflects the special aloha for people and 'aina that is the unique heritage of our Islands.